Speaking in Tblisi, Georgia on creating a sustainable future. 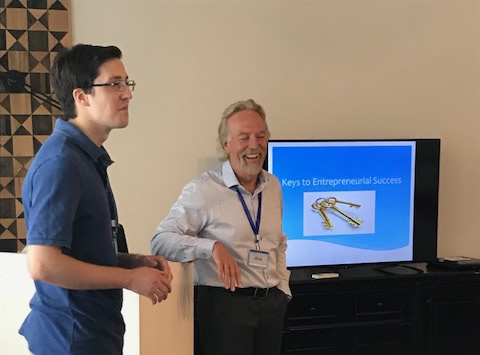 As I reflect back on the summer that just passed, I would like to share an amazing experience in a country that was not at all on my radar.

I had the good fortune of being invited to speak at a business conference in Tblisi Georgia.

The purpose of this conference was to empower young Georgians with the business and entrepreneurial  skills  required  to pursue their dreams and goals of independence while creating a sustainable future for their country and their children and to instruct them on how to pursue global standards of excellence and success.  The conference “Imagine Georgia” brought together international executives and local business leaders to help the local business people and budding entrepreneurs imagine a better future for business in Georgia and take steps toward meaningful change.

After the collapse of the USSR  in 1991 Georgia declared independence but not without some civil unrest that continued for many years. Today Georgia is a beautiful wine producing country and claims one of the most ancient wine traditions in the world. Archeological findings  indicate wine production back to 5000 B.C.  It is abundant  in natural resources and is today looking to create an independent and sustainable future for their people.

Another very unique fact I discovered was that the  Georgians used the Greek and Aramaic alphabets before adopting the Georgian alphabet, , which is not directly related to any other alphabet in the world and would explain why when I spoke a word my translator would speak a sentence. However, the young people are quickly learning English.

It was very humbling to walk down the streets of a city that is over 1400 years old and imagine what it might have been like to live through occupation by different countries. The Gerogians fought many bloody battles for their independence which was denied over and over again, the river literally   ran red with blood as the locals tell us. The cliché, of course, is that Tbilisi represents the epitome of East meets West: a Silk Road crossroads where Arab, Ottoman, Mongol, and Russian imperial forces each left their own distinctive cultural mark which is what makes this such a unique and diverse city. In the heart of the old town, rugs dangle from whitewashed wooden balconies and bearded Georgian Orthodox priests can be seen jostling with tourists on narrow cobblestone streets, it’s a compelling fantasy.